Back in the day, me and the homeboys (neighbor children from our cul-de-sac) would regularly mount our hogs (10-speed bikes) and head out on the open road. Most days were your average 9-5. A ride through the hood, rinse and repeat. But once in a while, business—well, business got a little complicated. Some days it was just an errand or two. A trek to 7-Eleven for a Slurpee. Maybe a bag of Skittles—the purple packaged ones, of course. I’m no animal. Other days, the stakes were a little higher. You see, our neighborhood in Kentwood, Michigan suburbia was fairly new. And apparently we were only Phase One in the development. I think you know where this is going. Phase Two was coming. Our parents outright forbid us from entering the Phase Two construction zone without their explicit permission. Absolutely forbid it (mostly because they knew we would explore all the halfway constructed houses/death traps, and, also, there was this one big hill they knew we’d ride down and probably beef it, which literally never happened except for maybe four times). But sorry, Ma and Pa. The streets ain’t got no rules. We owned Phase Two. Sons of Anarchy was inspired by Phase Two. We ran those streets and we ran them well.

Those were our summers. Those were our weekends, our school nights after homework and practice. Riding around the hood in small town suburbia, using the Harmon’s hoop as “home base” for Bloody Murder (a surprisingly nonviolent game, despite its foreboding title). Drawing chalk lines down my driveway to split the cul-de-sac in half for Capture the Flag. Arguing about whether at least half the flag was visible in its hiding spot. Every. Damn. Time.

When I wanted to hang out with my friends, I got my ass up and knocked on their doors. Sometimes I’d even—big breath now—call them. On their landlines. Technology was pretty much limited to a minimal window of Hey Arnold! and Rugrats before bed and Survivor on Thursday nights (yeah, it used to be on Thursdays. And yeah, my dad and I used to watch Survivor religiously. Sue me) and the use of a telephone to call my peeps. I honest to god still remember the Harmon and Hutchison (aforementioned neighborhood peeps) landline phone numbers, and it’s probably been over 12 years since I’ve called either.

I see parents pacifying children as young as two with iPads just to shut them up. Making them completely incognizant of the world happening around them. Their formative years spent in a virtual reality. I see pre-teen girls at Starbucks absolutely glued to their iPhones, getting the perfect shot of that Venti Frappuccino for ‘Gram. And you have to wonder—do they even know the girls they’re sitting with? When they have sleepovers, do they play Dream Phone and Mad Libs? Do they watch Billy Madison and How to Lose a Guy in Ten Days? Are they bonding in Kelly’s basement over pizza rolls? Or are they checking their phones? Snapchatting, Instagramming? Are they really even there? Do they even know each other? And if they don’t now, will they ever?

And what about us? We grew up in an entirely different world than today’s generation of kids. We didn’t have cell phones or iPads or Xbox Live. We had bikes. We had trampolines. We had cops and robbers and basketball in the driveway and football in our backyards. We had each other.

Listen, I’m not saying technology isn’t swell. You want to know how to bake some snickerdoodles from scratch? Whip out your iPhone and google that shit. You want to play Candy Crush while you wait in line at the DMV? Have at it. Wanna Facetime your precious dog, Baxter? Check.

And it’s lovely to keep in touch over Facebook, even if Aunt Frieda annoys the living shit right out of you with her unwavering use of all capital letters in every comment she leaves on every one of your photos. Twitter serves as a genuine news sources. My Twitter feed was my most reliable news source during this last election. It also provided the necessary comedic relief required after the debacle of said saga. And, hey, I like seeing pretty crap on Instagram. Sunsets, oceans, beautiful men. Yeah, I said it.

There’s nothing inherently wrong with sharing our lives with each other—sharing moments and events and memories. The problem is that we can’t stop. We can’t turn it off. We are forever and always attached to a device—an iPad, a phone. It’s in our purses, our pockets, our hands. And even when it’s not, even when you leave it upstairs, in the kitchen, in the car, or at work, it’s still there. It’s always with you. It’s a part of you.

And that’s when shit gets scary. Because there’s the question again. Can we ever fully know each other anymore? Or are we all forever resigned to knowing parts? The parts of each other that don’t belong elsewhere, that aren’t irreparably preoccupied. Can we ever be alone without our technology? Can we ever just be?

Put it away. Your phone, your iPad, your exploding Samsung Galaxy. Put it away for a day, as often as you can. Thanksgiving is right around the corner, what an opportunity! Hot dang!

So, put it away. Let the anxiety set in. And it will, trust me. Acknowledge it. Deal with it. And keep going. Push through. Talk to people. Talk to yourself. Talk to a brick wall, I don’t care. But talk. Engage. Listen. Love. For one day, don’t let yourself belong to anyone or anything but you. Know yourself. And know the people around you. Love the people around you. I promise you, it’s worth it. It works. And it matters. Do it for your family. Do it for yourself. Do it for the Kentwood Hood. But do it. It’s worth it. You are worth it. And love—love is worth it. 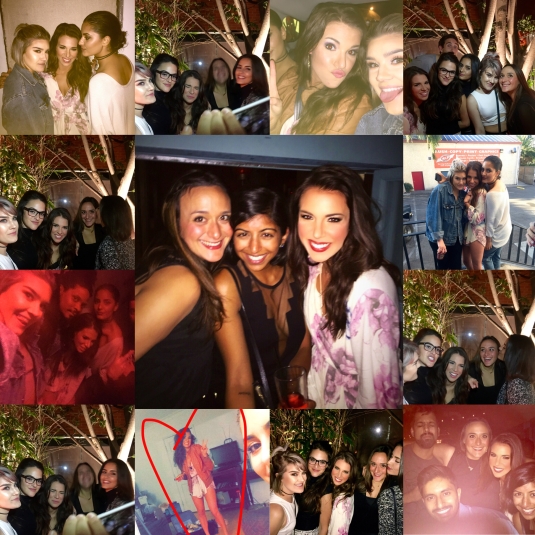 The picture in the center is what you see on the Instagram. You don’t see the countless others stored somewhere in some cloud that I don’t really understand because I’m a Marketing major and whoops. But they’re there. Why? Because we were on our phones. We’re together in the pictures, sure. But are we really? Are we completely?