Notre Dame’s football season is over. Sweet Jesus, Glory be! The clouds have parted, the sun is shining, and the storm has passed. Oh, happy day! Today, I shan’t lament the goings on of what can truly only be described as the most agonizing three months of my markedly-shortened life. No, today, I’d like to take this time to personally and ruthlessly vilify a select number of humans who made that agony possible—the ones who made me this way.

It didn’t have to be like this. I could’ve been one of those people who blissfully stirs from her bed on a Saturday morning, snuggled comfortably under the covers with a cup of coffee and a cheery disposition to boot. I could go to the farmer’s market and browse squash. I could smile. I could start the day without a heavy dose of Xanax. I could have proper cardiac function. I could see 30.

But no. Because I was raised in Notre Dame Football. From day one, this broad hadn’t even a glimmer of hope. And it’s time the people know the five individuals responsible for this act of cruelty, betrayal, and, let’s face it, domestic terrorism.

In any other scenario, in any other realm, these two are a positively enchanting little duo. Not today, folks. Not today.

Today, we take a stroll down one of my favorite lanes—Memory Lane. A stroll far down to the year 1993. Let’s begin:

A 10-0 Notre Dame was set to take on the Eagles of Boston College following a victory against Florida State now referred to as the Game of the Century. Riveting shit already, right? Living in Boston at the time, my procreators elected to attend the matchup in person, leaving their pride and joy at home. With a babysitter. A babysitter who woefully neglected to outfit me in my Notre Dame cheerleading uniform as I had been for the past 10 games.

So, what were Tim and Cyndi to do? Chalk it up to a mere coincidence? Make like Elsa and let it go? No, no. Not these two. They instead decided to write a letter to head coach Lou Holtz. From me. Not only explaining the situation but shouldering my own 18-month-old self with the responsibility and blame for the loss.

Lou-bird actually wrote me back, too. He was very understanding of the whole debacle. He even offered pardon for my egregious error.

But the damage was done. And what has followed in the 22 years since has been a fierce internal struggle with my demons—the guilt and the shame. A constant search, a constant battle for redemption. The 2012 season offered a brief glimpse of the other side—a taste of The Promised Land. But it was washed away with the tide (am I clever, or what?), as they’ve all been.

So, here I stand. The guilt and shame alive as ever—22 years of it.

And I have Tim and Cyndi to thank.

Oh, my sweet angel. Julius Jones. JJ. You majestic man, you. How dearly I love you.

But you ruined me.

The pain you caused comes from a wound so deep, sometimes it still feels agape. You ruined me. Let’s begin:

Julius Jones was a running back and special teams phenom for the Irish from 1999-2001 and 2003. That first year was it, the year I knew. He was The One. My prince. I was entranced. Any time he touched the ball, life stood still. He was positively electric, and I loved him with every ounce of my seven-year-old being. I was not alone in my emotional state, either. When Tim ventured off to purchase that coveted #22 jersey for my birthday, only mediums remained in stock. Men’s mediums. But it was no matter. I didn’t care. It was the cloth of my beloved, and I cherished it for those first two seasons as I assume one cherishes a newborn child.

The Mayans predicted the end of the world in the year 2012. But they were wrong. It came ten years earlier. Was it a genocide? A plague? A meteor?

No, my friends. It was far worse than that. The end of the world came in the form of an academic suspension.

But it was gone.

Julius Jones returned to play for his senior season in 2003. And by returned, I mean returned. He had three 200-yard rushing performances, set a single-game school record (still standing, BTDubs) of 262 rushing yards, and capped off his college career by establishing himself as one of five Notre Dame running backs in history to rush for over 3,000 yards.

But the magic? The electricity? The light? They were gone. Replaced with the unwavering ache of betrayal and heartbreak I wouldn’t wish on my worst enemy. I loved him. Oh, I loved him so. But he had broken me—irreparably.

Sometimes I still wear his jersey (still too big, still don’t care) and remember the way we were. I remember the magic, the electricity, the light. And I smile. I smile with love in my heart.

But make no mistake. I may still love you, Julius, but I am a broken woman because of you. You ruined me.

4 and 5: Matt Leinart and Reggie Bush

You know what you did, you inbred shitboxes. 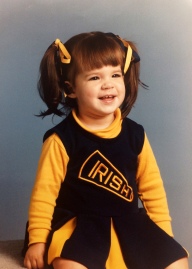 The uniform that crushed the hopes and dreams of millions 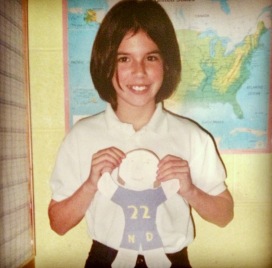 Julius Jones as my Flat Stanley in 4th Grade

Modern times in his jersey, smiling and laughing, happy as can be. But am I really? Or does the pain still linger?